The planned in silico part of the project has been accomplished. By defining specific reaction rules, we systematically identified promising routes that assimilate 2-phosphoglycolate into the Calvin Cycle without carbon loss. We further developed a kinetic–stoichiometric model showing that the identified pathways could potentially enhance carbon fixation rate across the physiological range of irradiation and CO2, even if most of their enzymes operate at low activity. Therefore, we show the potential to significantly boost plant productivity. The computational modeling is described in depth in this publication.

From this analysis, we identified two groups of promising synthetic photorespiration bypasses. 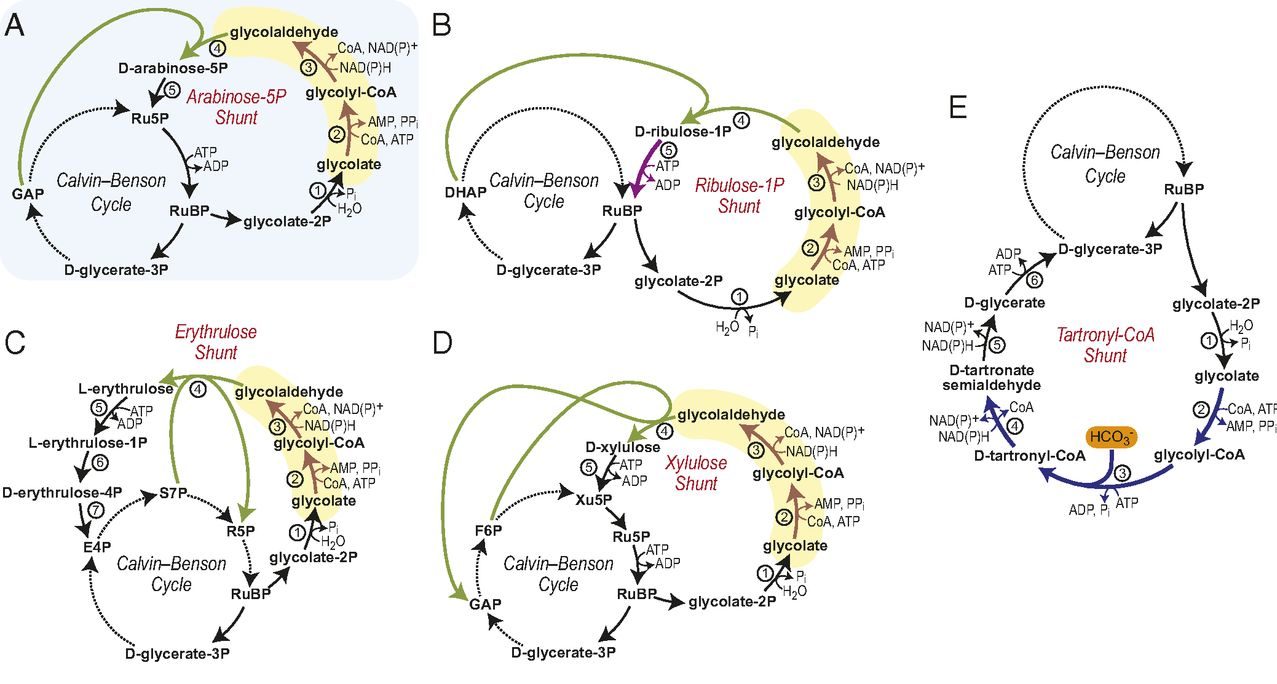 The first group consists of carbon-neutral pathways in which glycolate is reduced to glycolaldehyde (A–D in Figure 1). These synthetic pathways share a “glycolate reduction module” composed of two novel reactions (brown arrows and yellow shading). As an alternative pathway, the tartronyl-CoA (TrCoA) shunt (E in Figure 1) is carbon positive, that is, it relies on a carboxylation step, thereby directly supporting the activity of the Calvin Cycle. The TrCoA shunt requires the engineering of three novel reactions (blue arrows).

In the framework of FutureAgriculture, two of these promising pathways (TrCoAand arabinose 5-phosphate Ar5P pathways) have been successfully reconstructed in vitro, meaning that (i) all the necessary enzymes have been identified or engineered to perform the desired activity and (ii) the purified enzymes were mixed and demonstrated to work together to convert glycolate into an intermediate of the Calvin Cycle. We now face the challenge of implementing and optimizing pathway activity in vivo.

The in vivo pathway implementation is still underway and most of the work have been performed using the carbon-positive TrCoA and the carbon-neutral erythrulose pathway. We have further successfully introduced the two pathways in cyanobacteria, where they seem to be beneficial for the organism growth under certain conditions.

In the meantime, everything has been set for the synthetic pathway introduction in the model plants Arabidopsis and Brachypodium. Preliminary results are only available for the TrCoA pathway in Arabidopsis, where it didn’t show any significant physiological or phenotypic advantage compared to the wild type, both under stress and non-stress conditions. Therefore, the FutureAgriculture team is busy reviewing the pattern of expression utilized in Arabidopsis and collecting several insights that might lead to the pathway optimization. More experimental validation and phenotyping is currently under development for other transgenic plants. For the erythrulose pathway, potential growth retardation and in planta toxicity have been found in leaf- disk and seedling assays, therefore several mitigation actions are tested to avoid detrimental impact on plants.

This site uses cookies to improve your experience. Read More