The synthetic carbon-neutral pathways share a common element: the glycolate reduction module, which is composed of two novel reactions to reduce glycolate to glycolaldehyde. In the paper, published in the Proceedings of the National Academy of Sciences, we describe how they experimentally realized a carbon-neutral shunt by engineering the enzymatic activities needed for these two new-to-nature reactions.

By means of computational design and directed evolution we engineered: 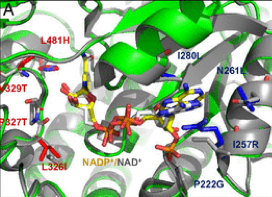 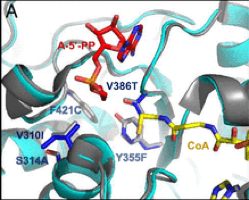 Figure1. Point mutations implemented to the selected enzymes in order to enhance their desired activity. From right to left: ACS19 superimposed to EcACS and GCR to RpPduP.

This module was then combined with three existing enzymes (EcFsaA-EcKdsD-RsPRK) to convert glycolate to RuBP, thus providing a proof of principle for the carbon-conserving A5P photorespiration bypass. We were able to produce RuBP from glycolate with an overall turnover rate of 0.05/s per enzyme for the entire pathway. The rate of glycolate reduction as measured by NADPH consumption matched the rate of RuBP production, indicating a tight coupling between the reduction and condensation modules, with no waste of reducing potential or off-target reactions in this in vitro setup. Such in vitro realization of a carbon-conserving pathway, as provided in this study, provides the foundation for its realization in photosynthetic organisms.

This site uses cookies to improve your experience. Read More